Column sent to Frederick Leader and Frederick Press
March 1, 2011
Meeting featured special memories of Craterville
Craterville was a special place that many people hold dear in their memories.
Frank Rush III, grandson of Craterville Park’s founder, spoke at the Tillman County Historical Society’s 2011 annual meeting on February 27, and told stories from Craterville’s history and his family’s involvement with the park. Approximately 75 people attended, most of whom had personal memories of Craterville.
The people in attendance also told many stories about their experiences at Craterville. The stories brought many smiles and happy memories.
There were actually two Craterville Parks. Frank S. Rush organized the first Craterville north of Cache in 1923. Rush had served as the first forest supervisor at the Wichita Mountains Wildlife Refuge. He had been commissioned by President Theodore Roosevelt as the nation’s second forest ranger (the first was in Yosemite Park in California), and tasked by Roosevelt to re-establish buffalo at the refuge.
The senior Rush formed Craterville when he retired from the U.S. Forest Service in 1923.
When Frank S. Rush died in 1933, his son E. Frank Rush took over operation of the park and built it into the most popular family recreation area in Southwest Oklahoma and North Texas. It is important to remember that this was an era before computers, video games, or cable television. The countless entertainment options that exist today did not exist then. Folks went to Craterville Park for recreation and fun.
In his presentation at the annual meeting, Frank Rush III described all of the original park’s attractions: a grocery store and post office where people could buy supplies or mail 3-cent post cards; a glass house and dark house maze that one walked through in the dark; the pretzel ride; a skating rink (strap-on skates were rented and cost of skating was 25-cents for an hour); a concession stand (Fairmont ice cream., Root bear, popcorn and hot dogs); camp grounds; rental cabins; a cobblestone golf course; bumper car rides; an arcade; a full cafeteria; a swimming pool (complete with fish and turtles) that was fed from natural springs; and an Indian curio store.
Amusement rides on the midway included a Ferris wheel, a train, and a rock-o-plane ride.
Other popular attractions were a monkey cage, horse rentals, a snake pit (with rattlesnakes that were gathered from the local mountains); and Jimbo the steer, advertised as the world’s biggest at more than 3800 lbs.
Many of the era’s most well-known entertainers performed in free concerts at a stage near the midway.  At the historical society meeting, Frank Rush III asked what stars the local folks had seen at Craterville. The answers kept coming – Hopalong Cassidy, Roy Rogers, Rex Allen, Stonewall Jackson, Dale Robertson, Tex Ritter, Rin-Tin-Tin, Minnie Pearl, and Little Jimmy Dickens.
Other acts at Craterville over the years included circus acts, a bear act, dog performances, a horse act, a human cannonball, and many more.
The old Craterville was closed in 1957 when Fort Sill land was expanded to include the park. Frank Rush III described the land expansion as very controversial at the time, an effort to make Fort Sill so big that it could not be closed.
The federal government promised to treat landowners fairly, but did not.
Although E. Frank Rush moved Craterville to a new site north of Altus, he never recovered from the financial losses that were caused by the government land grab of the original site.
The second Craterville operated at the new site near Quartz Mountain until the late 1960s. Although never as successful as the original Craterville, Frank Rush III said he finds many people who remember the “new” park with sentiments as emotional as the original one. The second Craterville closed in the late 1960s when the Rush family moved to the Dallas area to stage a successful Wild West Show at Six Flags Over Texas.

Since 1971, the Rush family has owned and operated Sandy Lake Amusement Park near Carrolton, Texas. 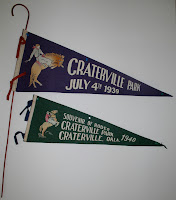 NOTE: Historic photos are property of Frank Rush III and used with his permission.

AT RIGHT: Craterville pennants from 1939 and 1940 are on display at the Pioneer Townsite Museum.


Joe Wynn is a member of the Tillman County Historical Society’s board of directors. He can be contacted by e-mail at jawynn@cableone.net.
Posted by Joe Wynn at 4:22 PM

Joe Wynn
Oklahoma City, Oklahoma
Joe is a Tillman County native and is a former longtime member of the Tillman County Historical Society's Board of Directors. He wrote "Tillman County Chronicles" as a weekly column for Frederick newspapers from January 2009 until January 2012. Although he no longer lives in Tillman County, he maintains an active interest and knowledge of the area's history. This blog is a record of old, updated, and new pieces. Although he no longer writes "Chronicles" as a newspaper column, Joe continues to occasionally update the blog site with new entries.